The Charity was founded by William John Mills, who was born in St. Day and later moved to Devon where he built up the Duchess of Devonshire Dairy. In 1930, Mr.Mills purchased what was then known as Simmons Street for the inhabitants of St. Day and the surrounding area in need of accommodation. The street was renamed Mills Street and, in 1933, the charitable trust created.

There is a commemorative plaque at the top of the street dedicating it to the memory of Mr. Mills’ parents and sisters, who are buried on the south side of the old church.

His son, T.R. Mills, subsequently ran the Trust followed by his son, also William John, who served as a trustee for 40 years and supervised the modernisation of the properties, a fact commemorated by another plaque at the top of the street.

In 1989, the trustees purchased commercial properties in Barracks Lane, converting them into the Community Room, a flat and a 2-bedroom house, now known as Mills Court. In 1997 the Trust purchased a derelict piece of ground at the rear of Market Square (on which 2 houses had been demolished about 20 years earlier) and built three 2-bedroom houses.

In recognition that the houses in Mills Street were not suitable for older people with disabilities, in 2009 the trustees built Mills Gardens to provide seven specially designed one-bedroom bungalows. 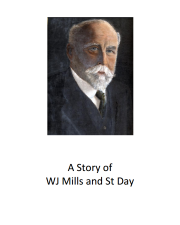 A detailed history of the WJ Mills (Cottages) Trust can be found in the booklet linked above.